THE DAIRY
The original dairy at Nonsuch had two entrances, one from the courtyard and the other from the gardens. Ladies of the house who visited the dairy, and may even have helped with the work, used the latter. At some later date, it was converted into a public toilet for the formal gardens.

A smaller, adjacent building, the original purpose of which is unknown, was found to contain a collection of English delft tiles, much like those in larger country house dairies. It has been re-created by the Friends of Nonsuch, as an 18th century country dairy.
THE KITCHEN
The kitchen at Nonsuch is Georgian but was adapted in the Victorian period.The dresser and the open roasting range were part of the original kitchen although the Feetham closed range was added in the 1860s. (At some stage, the open roasting range was bricked up, but the Friends of Nonsuch uncovered and restored it.). The brick ovens under the window were part of a 'sauciere'. Sauces and slow cooking casseroles etc. were cooked on gentle heat. This simmering range was fuelled by charcoal and always situated next to windows to allow noxious fumes to escape. 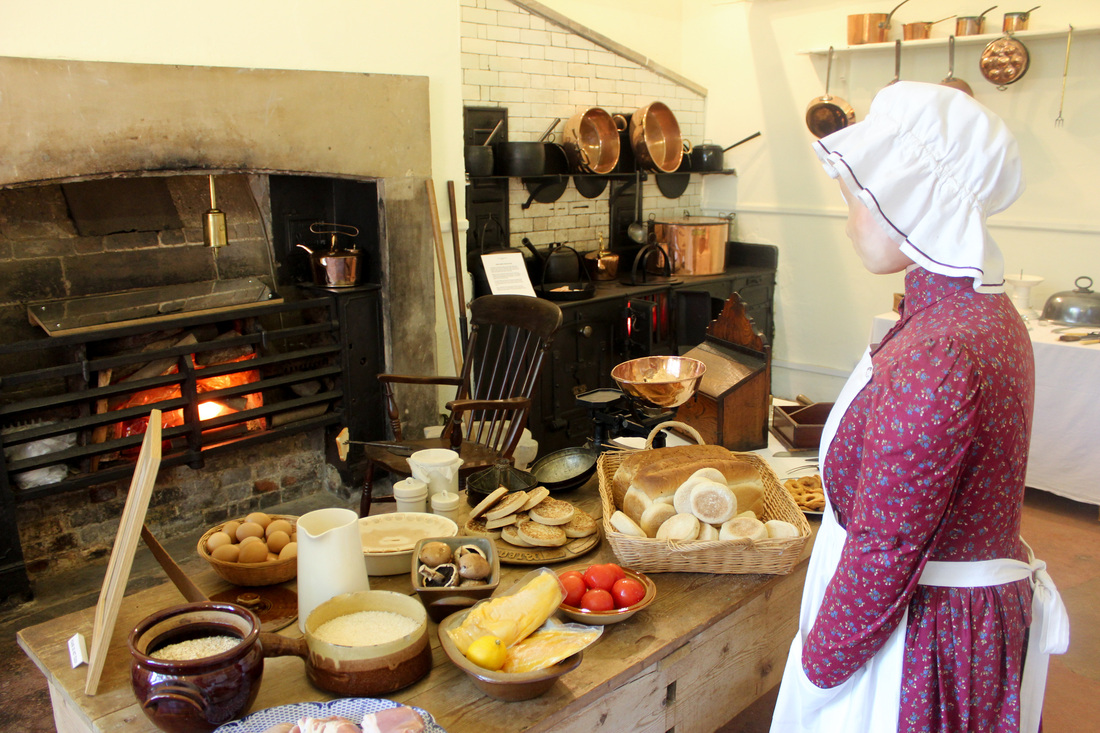 The kitchen also contains the bell plates originally hung in the hallway leading to the servants hall. The hallway and the Servant's Hall are now parts of the café.
THE LARDERS
There are four separate areas to the larders or pantries, as the Georgians would have called them. The inner and outer larders are original to the service wing but the pastry and game larders were added between the 1840s and 1860s.

INNER LARDER or PANTRY
The food stored here would have been set aside for later use as the screen was kept locked to prevent any pilfering.
A lattice screen, aided by a mesh-covered window at the back,allowed air to flow freely through the larders.
OUTER LARDER or PANTRY
Food that was in every day use was kept here. There was originally a cupboard on the wall facing the door to the kitchen but this has rotted away.

PASTRY LARDER
A Pastry Larder was a luxury that not all kitchens were lucky enough to have. Here pastry was made in a cool environment away from the heat of the kitchen.
.
.
THE LAUNDRIES
The laundry is divided into two areas; the wash house or Wet Laundry and the drying room or Dry Laundry. The laundries are one of the last areas of the Service Wing to have been used. The notice on the door, dealing with ration books,suggest that they were used during the Second World War when they may have been converted into a wash house.

THE WET LAUNDRY
THE DRY LAUNDRY
This room was set aside for the drying and pressing of the laundry. There is a comprehensive display of irons used during the period of the house's occupancy but the only original piece to the house is the Box Mangle.

The Box Mangle was invented in the eighteenth century and allowed mangles to both press and wring.

THE LOOSE BOX
In its original form, the Loose Box was provided primarily for sick horses or mares in foal so they could lie down. At the Service Wing Museum it has been reincarnated as an exhibition space.

Presumably, this part of the Stable Block was added to the existing stable in 1806- It is divided into two sections with a central drain. In the South East corner is a multiple feed, hay and water bay marked Paddington Iron Works 1806.

During restoration, the original brick floor was lifted, cleaned, raised and reinstalled. The bricks were turned over for the re-installation.

THE STAINED GLASS
The permanent exhibition in the Loose Box is the Nonsuch Collection of Stained Glass. Please note that some of the stained glass is still in situ throughout the house and is not visible unless the main reception rooms are open. 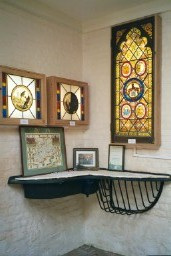 CHANGING EXHIBITIONS
An area of the Loose Box is reserved for changing exhibitions. The exhibition in the Loose Box in 2012 will be based on the work of the Friends of Nonsuch and the many events which have been organised over the past 20 years to make the necessary funds used for our voluntary work in the house and Park.


STABLE ROOM
This room was originally a stable for four horses. During the renovations. it was discovered that the foundations were made with stone, probably recovered from the ruins of Nonsuch Palace. Pieces of the fabulous stucco decorations were found in the sand below the original brick floor. The room has been fitted out as a utility room,mainly to accommodate school parties visiting Nonsuch Park but it is also used for members talks and events. During public openings it serves to house our small shop.

NONSUCH PALACE GALLERY
The Nonsuch Gallery has been adapted from the former coach house. Once again,new floor, roof and windows have been provided. As with the Stable Room, the foundations appear to have been have been made with recycled stone, presumably from Nonsuch Palace. The Gallery is dedicated to the study and celebration of the great achievement of Nonsuch Palace.
.
The Friends of Nonsuch (registered charity number: 1053923)
Enquiries to info@friendsofnonsuch.co.uk