The Farmer Family of Nonsuch 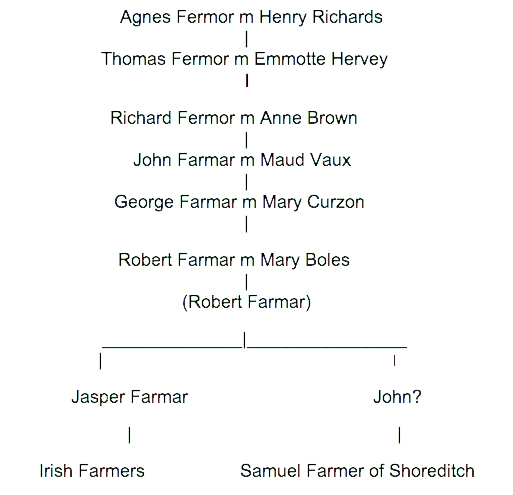 The Fermor family trace their routes to Witney in Oxfordshire where they made their money in the  wool trade. The dynasty was founded by a wool heiress Agnes Fermor and Henry  Richards a welsh sheep farmer who had gained substantial land holding in  Oxfordshire. Henry took his wife's name as she was higher in society's standing otherwise we would be referring to the Richards of Nonsuch.

The family entered  the court of Henry VIII when Richard Fermor's brother William attained the rank  of privy councillor. Unfortunately Richard was a staunch catholic and the family retained its catholiscism and therefore they never really attained a place in court life after the final reinstallation of the Church of England under Elizabeth I. However they remained successful businessmen and eventually a second branch of the family was founded in Cork, Ireland by George Farmar's second son Robert. It is from this family that the Farmers of Nonsuch claim their descent.

During the English  Civil War the family was forced to return to England, returning after the  restoration. Maybe the Nonsuch branch stayed in England or emigrated back to  England in the 1680s as a result of changes to the trade law which crippled the  cloth trade in Ireland.

The Farmers of Shoreditch:

The Farmers of  Shoreditch founded their fortunes in scarlet dying which they ran from their premises in Hog Lane(now Worship Street) Shoreditch. Samuel Farmer's elder  brother William made a career in the East India Company and together with his  brother entered into many successful trading ventures. Through the connections  to the Gamull
family they gained their first family seat at Crabwall Hall, Cheshire.

The Farmers of Nonsuch: 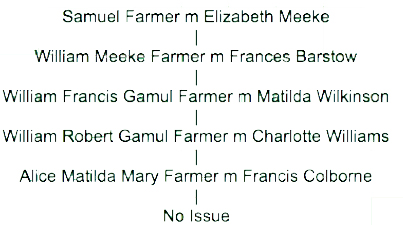 The Farmers of  Nonsuch spread themselves through marriage across Europe and to America and  Canada. They rose through society establishing links to English and European  aristocrats. Eventually through Alice's marriage to the Honourable Francis  Lionel Lydstone Colborne, Equerry to Princess Henry of Batternberg they entered  royal circles.  Unfortunately Alice and Francis did not have any children and  the estate at Nonsuch passed to Pamela Farmer a granddaughter of William Francis  Gamul Farmer at Alice's death. It was subsequently sold to Surrey County Council  in 1938.

If you have any information relating to the family history especially the Irish branch of the family and how they link into the Farmer family at Shoreditch The  Friends would be delighted to hear from you
.
​The Friends of Nonsuch (registered charity number: 1053923)
Enquiries to [email protected]