The existence of the remains of a white chalk and flint block wall which date from the 16th century suggests that there were buildings on the current site of the mansion which serviced the palace. Possibly the Keeper's Lodge described in the Parliamentary Survey of 1650. We do have an account from the Rev W. T. Bree of the building and gardens as they were when Samuel Farmer purchased the Nonsuch Park Estate in 1799.

"The house was particularly ill-suited for the purpose of adding anything of interest to the scene: it was a long, low, red building, with eleven heavy sash windows in a row, and the same number above. From the east corner of this south front a high wall extended to a considerable length, with a a pigeon house and stable at the end. To add to its disqualifications, it was enclosed within walls (courts), planted round with formal rows of trees. In front of the house was a large lawn, interrupted about half way by a chalk pit; the front of which was shelved down, and the back so planted as to give the effect of beautifully undulating ground in front, and thick sheltered wood behind" Samuel Farmer obviously agreed with the Rev Bree's opinion of the existing house and two architects, John Nash and Jeffrey Wyatt, were approached. Wyatt's design was approved and construction took place between 1802 and 1806. It was Wyatt's first attempt at the Tudor Gothic style which he later used to great effect at Windsor. 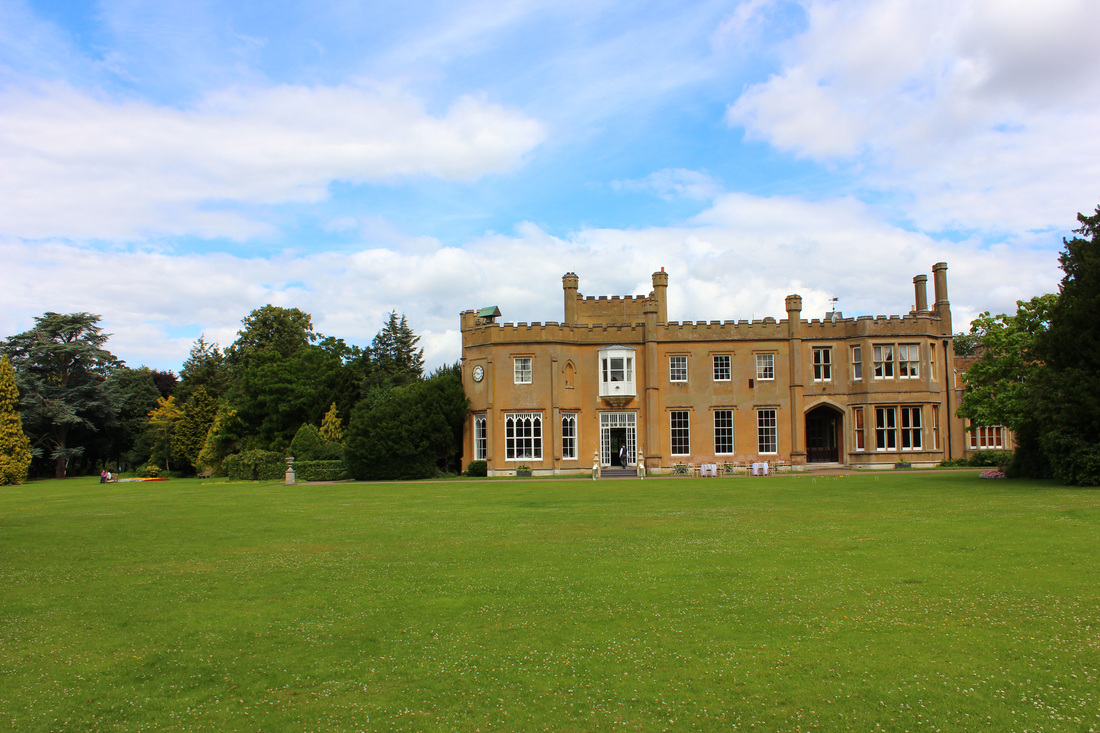 The entrance facade clearly takes its origin from the Tudor building, even facing north as was the Tudor custom. A stone set in the wall is inscribed 'HENRICV OCTAVS 35'. The tablet, thought to be terra cotta, may be from either the palace or the building that the stood on the site of the present building. To the left of the entrance there appears to be a chapel which on closer inspection, is found to be the Servants' Hall - now the public tearoom - and above it a capacious bedroom. The original south front - facing the garden - follows Georgian symmetry and depends far more on 'Tudor' detailing. The whole of the main part of the house is built of brick and rendered with 'Roman' cement and lined to resemble ashlar. There are extensive cellars underneath the building; originally allocated to the storage of alcohol. The whole estate was fitted up for the civilised life in late Georgian Britain. A large kitchen garden, glasshouses and orchard were built to supply the needs of the kitchen. Attached to the Head Gardener's or Bailiff's house was the home farm stockyard for the supply of fresh farm produce. Beyond the kitchen garden an ice house was installed. In the later years of the nineteenth century the produce from the complex would also supply the family's town house in Wilton Crescent.

Visitors to the mansion would have entered by doors in a large glazed screen into the Entrance Hall. When designed, this room was meant to be heated by under floor ducts and when the floor was restored substantial remains of the ducting were discovered. From the entrance hall is was possible to access the Main Receptions Rooms of the Mansion House.

THE LITTLE DRAWING ROOM : This room was originally the library and a couple of the built in bookcases can be seen on either side of the folding doors. Probably the most noticeable feature of this room is the stained glass. Of Victorian manufacture, it clearly depicts Henry VIII and Elizabeth I. The centre panel, is probably sixteenth century German, and represents a Holy Roman Emperor supported by St. Andrew. Sadly, some parts, notably the Emperor's head are replacements and were fitted when the whole scheme was supplied. The room appears to have been renamed 'The Little Drawing Room' when the new library was constructed in the 1840s
,
THE ANTEROOM : A relatively, small room with french windows allowing direct access to the gardens. Facing south, any sun, in Spring or Autumn would warm the room and make it very suitable for taking tea. The large, oak doors provide direct access to the Entrance Hall and so a convenient place to interview callers. Over the doorways there are examples of marriage coats of arms. The Farmer arms with a swan for Samuel Famer and Meeke; the Farmer arms with three unicorns for Farmer and Wilkinson and the Farmer arms with three saracen's heads for Farmer and Williams. Over the doors to the gardens are four pieces of glass representing a young peasant, a pope, a saint of architecture, possibly St. Jerome and a prophet, possibly Elijah. This glass appears to have been fitted when the house was built and demonstrates one of Wyatt's conceits

DINING ROOM : Here again the Tudor theme is given full reign The ceiling is divided into compartments with Tudor symbols at the junctions. The fireplace, which dominates the room appears to be a later replacement as its decorative details are clearly Medieval. At the top of the overmantel are the arms of Farmer impaling Wilkinson and the family motto 'Hora e Sempre' - Now and Always - and at the very top, the family crest, a cock's head issuing from a ducal coronet. Three portraits are displayed in this room. The one to the left of the fireplace is of William Francis Gamul Farmer who owned the estate from 1838 to 1860. Grandson of the builder of the house, he was the eldest of a family of seven sons and four daughters. On the right of the fireplace hangs the portrait of the eldest son of William FranciS, Captain William Robert Gamul Farmer who owned the estate from 1860 to 1910. The portrait by the window is of Mrs William Francis Gamul Farmer (nee Wilkinson) and is clearly a partner to William Francis' own portrait

THE VESTIBULE : From the dining room the next room is the vestibule. Originally this was the vestibule to the conservatory and gave direct access to the garden. It now serves as a secondary entrance hall for visitors entering via the garden gate

THE LIBRARY : During the 1840s it became necessary to provide more accommodation and so the single storey conservatory was enlarged to form a new library and to create bedrooms on the first floor. Although meant to copy the decoration of the rest of the house, it lacks the invention shown elsewhere and decorations, like the chimney bosses, are clumsy compared with the original work, seen in the vestibule. At one time the wall opposite the window was covered with open bookshelves in light oak which were carved with Gothic architectural details. These disappeared when the rooms were converted for use as a committee room, sometime in the 1950s.
​The Friends of Nonsuch (registered charity number: 1053923)
Enquiries to [email protected]